It’s not really a new racquet, but Jack Sock has posted pics on his Instagram account of a new paint job 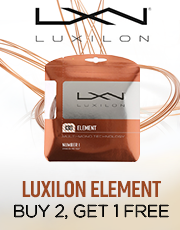 (it’s not his actual racquet in the picture – he uses the Aero Storm, not the Pure Aero). It’s a Stars and Stripes paint job, similar to those of Jim Courier and the Wilson Pro Staff in the 90s. I assume he will use it for the Olympic Games (that’s where it makes most sense), but it’s not yet confirmed. The American Stars and Stripes will be a part of a bigger launch according to Babolat representatives. Which means that you will be able to buy a Pure Drive or Pure Aero in this new patriotic paint job.
To me all these Stars and Stripes paint jobs look extremely tacky. What do you think?

The Babolat Stars and Stripes series is also part of the Jack Sock for President campaign which tags on to the current Presidential nomination race. Del Potro is back for real and other news

Seriously?? American flag paint job, extremely tacky??? If your proudly displaying the flag, how could it be considered tacky?? It’s awesome!! I want one, after all I’m proud to be American and would proudly use one!! Hope it’s available soon!!

this was the coolest cosmetic! wait until you see the 2020 Babolat Flag racquets. They’re even cooler!