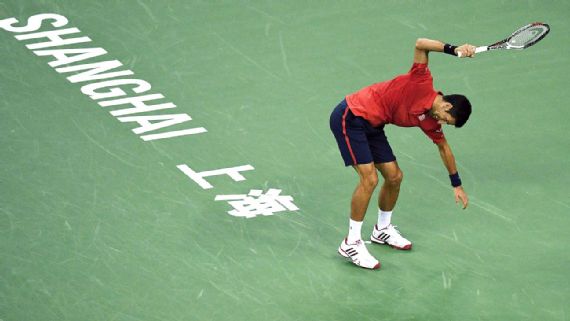 Andy Murray is playing the game of his life and just qualified for the Shanghai Masters final after winning another encounter, this time against Gilles Simon, in straight sets. He might also be edging closer to becoming the world’s top-ranked player soon, because the current world number one, Novak Djokovic, has just returned from elbow injury and showed that there were perhaps other issues than just rust from lack of playing when he lost in the Shanghai Masters semi-finals to flat-hitting Spaniard Roberto Bautista-Agut, 6-4 6-4. Why other issues? Well, you rarely see the Serb smash a racquet into pieces, argue with the umpire and angrily tear a hole into his shirt.

What ails Novak Djokovic? It’s hard to tell. After Wimbledon he alluded to private issues which most newspapers “guessed” to be stemming from his marriage, but also claimed they had been resolved. Have they popped up again? Is he just tired of the pressure of being nr 1? We can all speculate, but the player that is benefitting from this the most is Andy Murray, who won Wimbledon for the second time in July and is on quite a run this year.

Personally, I’m not the biggest fan of the games of either Djokovic and Murray simply because I prefer attacking players from counter-punchers, but you can’t help by being impressed by their abilities. And I think that the tennis world would benefit from a new number one for a while and I also believe that Murray, with his very consistent run among the top four players in the world, deserves it more than anyone else.

The new generation is knocking on the door and the era of the “fantastic four” will come to an end, no matter how much we want Federer, Nadal, Murray and Djokovic to keep playing forever. Kyrgios is still a baby on the court sometimes, but his talent is undeniable; Goffin is maturing into the top ten; Zverev is starting to win titles already and so on. It’s simply time for a new line of top players to break into the top ten, carve out their place there and hopefully entertain us tennis fans for years to come in the process. However, before that happens, let’s give Andy Murray a few months (or more) as the number one player in the world.

I think he’s ready for it.