Yesterday Novak Djokovic found his long lost friend the coup de mouscetaires and managed the awesome feat of winning all four grand slams in a row (not in a calendar year yet, but anyway). It was the end of two rollercoaster weeks of “tennistainment” where rain and injury played a large factor. It was one of the rainiest French Opens in history and tournament director Guy Forget got to answer a lot of questions about the absence of a roof as well as floodlights and night time matches. They’re supposed to fix this for the 2018 edition.

Another deeply felt absence was Roger Federer who didn’t play his first slam since 1999(!). He decided to save his bad back for the grass court season and will (hopefully!) play in Stuttgart in this week’s Mercedes Cup. Nine-time French Open winner Rafael Nadal was an obvious favorite from the start but had to pull out due to wrist injury and was last seen on a beach somewhere with a large wrist support looking pretty glum about things. 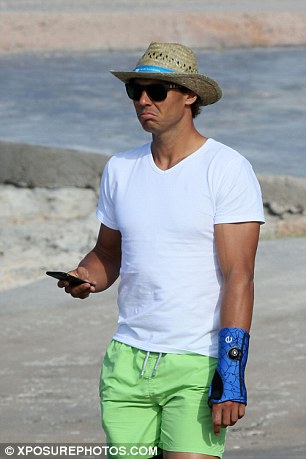 Let’s all hope we get to see Rafa on the courts of Wimbledon at least. For the home crowd it was especially sad that one of their most solid players in their home slam, Jo-Wilfried Tsonga, also forfeited due to injury in his match against Ernests Gulbis. All these injuries meant the draw opened up wide for Murray and Djokovic but also for the young guns Thiem and Goffin. 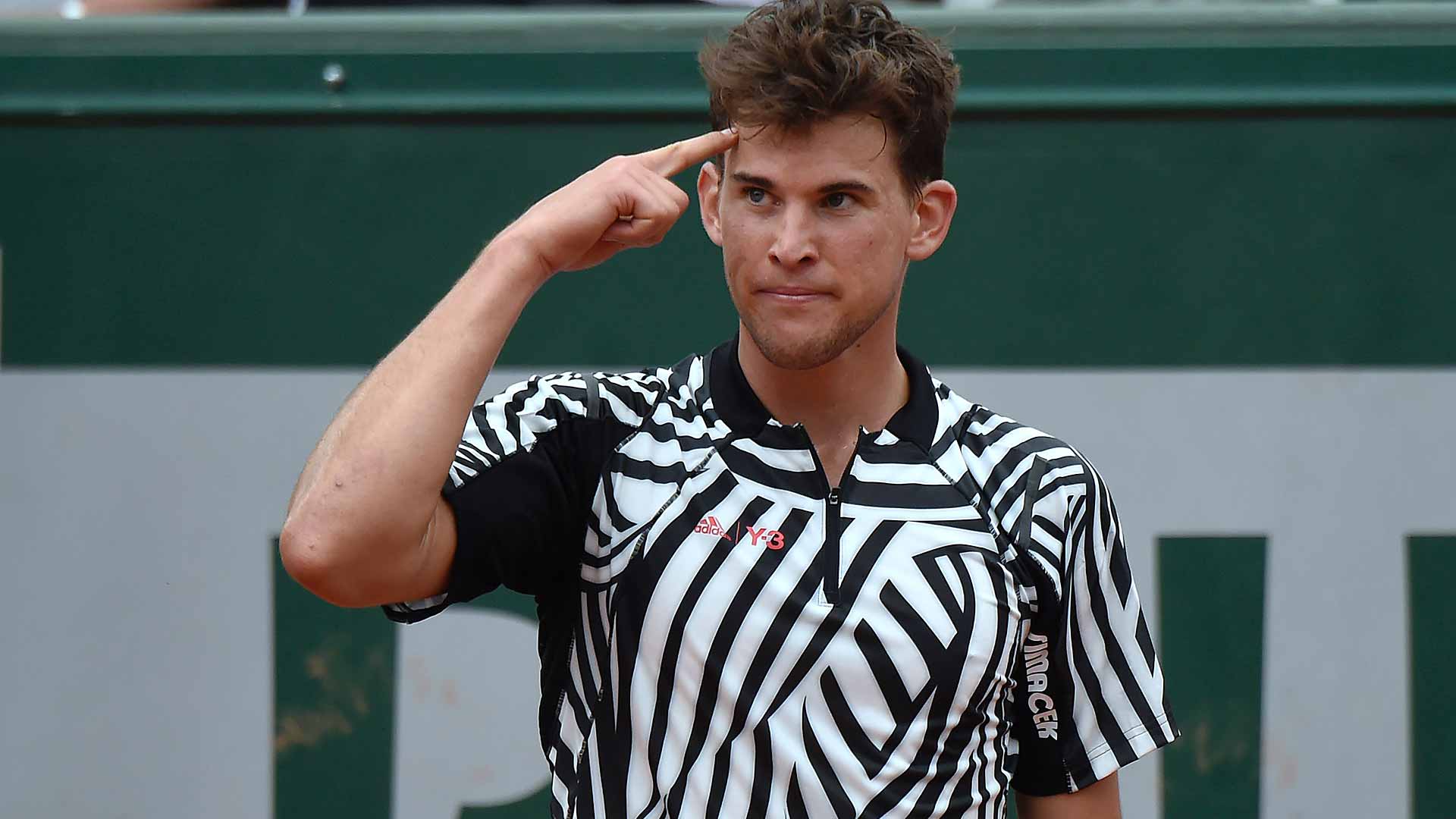 I’ve long hailed Dominik Thiem as a force of nature as well as a force for the future, much due to his massive top-spin shots, but also because I’m impressed by his focus and maturity. He did, as I predicted, have a great run in Paris, but was stopped quite forcibly by Djokovic in the semi-finals. Thiem is now inside the top ten and it will be interesting to see if he can get some results going also on grass. It should be as natural of a surface to him due to his long stroke preparation, but the grass is getting slower these days so you never know.

David Goffin was another player with big expectations on his shoulders and who seems calm and confident enough to make them come true. He was stopped by Thiem in one of the best matches of the tournament and is for sure going to be a contender for titles the rest of the season. Goffin doesn’t seem to have a standout shot, but he does everything pretty well and his movement and determination is top notch.

Another young gun that did okay for himself was the feisty and fiery Nick Kyrgios. He has been playing better of late and I thought he might make a run for it, but Richard Gasquet (remember when he was called “Baby Fed”?) played a great match against him in round three. Kyrgios will for sure be a threat in Wimbledon with his big serve and power groundstrokes.

Young guns aside, two players stood out during the whole tournament and that was Djokovic and Murray. 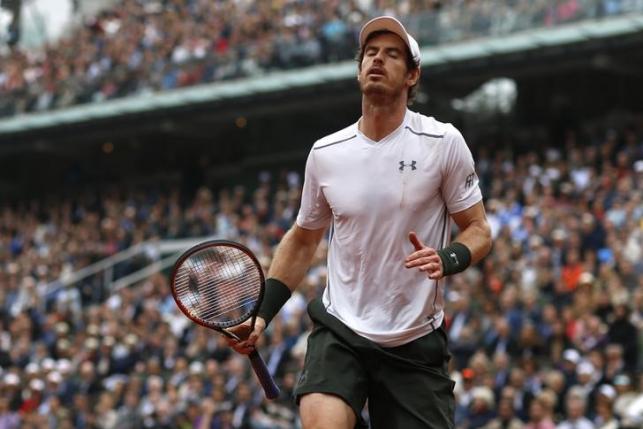 It’s a rivalry that goes back to their junior days and now they’re fighting for grand slams as number one and two in the world. Djokovic and Murray has already played 34 matches against each other (24-10 in Djokovic’s favour) and I suspect there will be quite a few more in coming years. What bothers me about this particular rivalry is that their styles are very similar and that the matches become more of a display of fitness and patience than shotmaking and the always alluring attack-defence seesaw. And it’s a war of patience that Djokovic most often wins.

But it’s tennis and tennis for the players is about winning, not entertaining the crowd. And there is of course entertainment in watching two players so skillfully manipulate the ball back and forth between each other and an amateur’s wet dream to be able to play with such spin and power rally after rally with very few mistakes. It’s just not the tennis I personally prefer to watch and that’s why I find the other top player rivalries more interesting than this one.

It’s hard not to mention Murray and Djokovic without touching on their journeys to their final. Djokovic had his toughest and most frustrating match against Bautista-Agut in the quarters, but it was hard to see it as a possibility that he would ever lose it (Djokovic vs Berdych is a match-up I’d hardly watch due to its predictability, 24-2 head to head). I thought Thiem might be a challenge for Djokovic, but the world number one completely defused the young Austrian’s power in a masterful display. That’s when I felt sure he would win the tournament, although it was my prediction for the start.

Murray, on the other hand, had a much more challenging road to the final with two five-set matches against opponents you wouldn’t think go to five sets (Stepanek and Borgue). He played his best match of the tournament against Wawrinka where he really found a way, similar to that of Djokovic against Thiem, to neutralize the power of the Swiss.

What annoys me with Murray is his mood. It doesn’t take a lot to get Murray muttering, swearing to himself and being angry with seemingly everything. Tennis is a sport and a profession and it hurts to miss shots you think you should make, but the way Murray whines at times is quite appalling and childish in my opinion.

On a positive note however, it impresses me with how much he has improved his clay court game and I’m sure he has a decent chance at winning the French Open the coming years.

Leaving the results and looking at some of the wear and gear of this year’s edition of Roland Garros there were a few things that “made their mark.”

The most eyebrow-raising kit was definitely Adidas and Y3 and their Zebra-inspired partnership. Gauging from social media it seems like a lot of people dislike it, but it definitely got some buzz and the talk going which I think was the intention all along. I wrote a post about it here and it would be interesting to hear your comments about it.

American Jack Sock sported a Stars and Stripes painted racquet (he playes the discontinued Aero Storm, but I think they will market it as a Pure Drive) which goes back to the days of Jim Couries and his Stars and Stripes painted Pro Staff. It’s part of a Jack Sock for President campaign that’s being run by Babolat well in time for the Olympic games.

I tweeted this about Sock which he “liked” and then decided to block my account from reading his tweets. I don’t really know why to be honest, it was an innocent enough comment.

I don’t have time to also follow the women’s game closely, but regarding wear, this Le Coq Sportif jumpsuit worn by Alize Lim got a lot of attention. Good and bad. 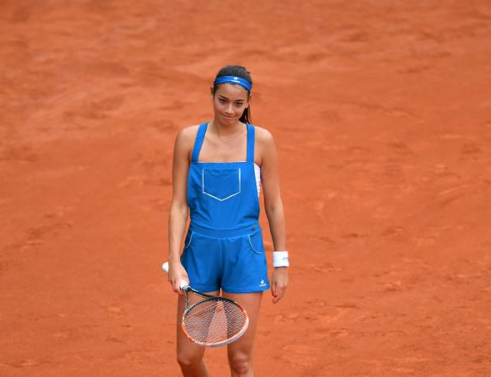 Racquet-wise a lot of focus has been on the new Babolat line called Project One 7 that is used by Thiem and also a few junior players. I’m not sure about the release date yet as they still seem to be gathering insight from players play-testing the racquets, but will keep you posted on the specs as we move along. Rumours are that Thiem is still using his Pure Strike 18×20 for his matches still, but is trying the Project One 7 on and off during practice.