I was a bit surprised when Wilson announced that they were releasing a signature edition of the racquet that Federer started out with, the Wilson Pro Staff 85. Here are my thoughts after playing with the racquet.

First off I’m a long-time Federer fan and his rivalry with Rafa is one of the reasons I’m such a tennis nerd today. Yet, I still find it a bit too much to have Federer’s face above the grip. I know the idea comes from the old Wilson Pro Staff Jack Kramer Autograph, but it still looks a little bit strange. I thought the RF-letters would have been enough, but that’s just a subjective cosmetic thought. In general the racquet looks great in its matte black finish.

I’ve recently been playing with an older Wilson Pro Staff 85 so it’s nice to compare if there is any difference between these racquets.

I strung up my Wilson Pro Staff RF 85

with a hybrid with Gosen OG Micro Sheep synthetic gut

in the mains and Ytex quadro twist

It doesn’t take long to appreciate the relatively large sweet spot of the Wilson Pro Staff RF 85 and how easy it is to swing with its head light balance and thin beam. It’s not a top spin machine, but that doesn’t mean you can’t hit all types of shots with it. I feel the small racquet head really helps me on the one-handed backhand and when it comes to volleys it really gives you the utmost precision and feel. For players with classic strokes or who like to come to the net and play aggressive, this could still be a racquet to take into tournaments. 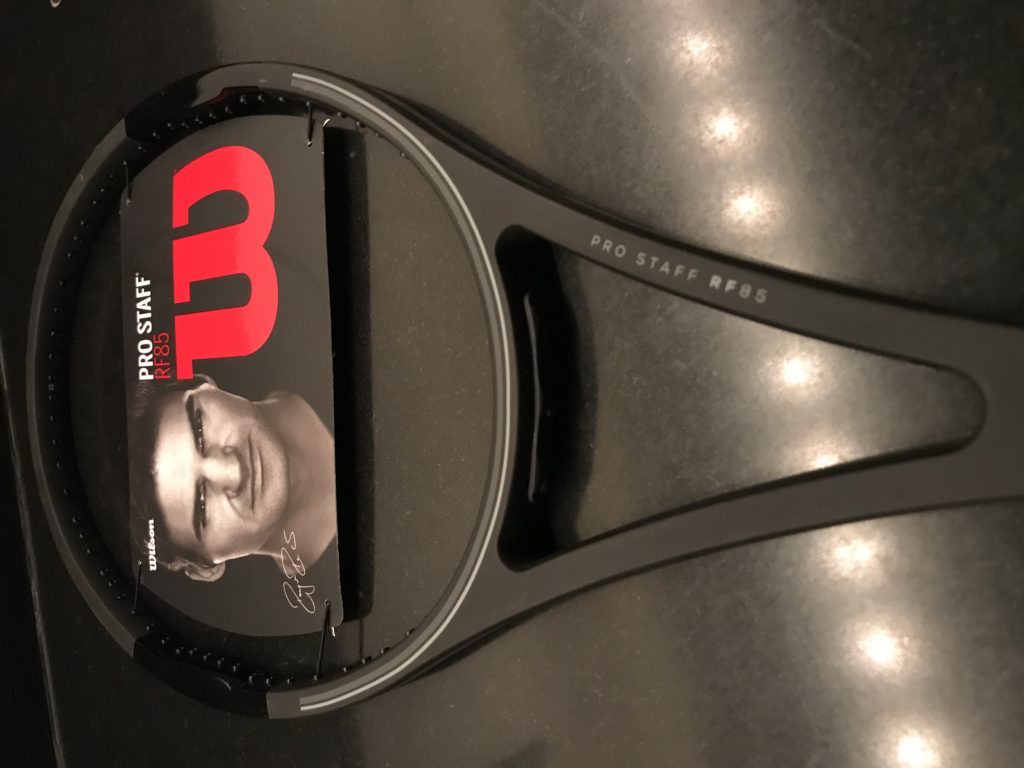 Comparing the new Wilson Pro Staff RF 85 to the older one is not that difficult. The new RF 85 feels slightly crisper straight out of the box. Probably in part due to that the older version has had many more hours of hitting which has softened the graphite. Otherwise the new RF 85 feels right at home and is such a joy to hit with. It really helps you clean up your technique  and I’ll gladly keep one in my bag just in case I feel like working on a particular shot or I crave that braided graphite feel and that ultra-thin beam.

is simply still a great racquet. Admittedly it’s a little bit pricey at 249 USD, but the old Pro Staffs are not easy to find these days and this is a beautiful limited edition gem that I’m sure you’ll treasure for years to come. If you don’t play with it so much, just put it on the wall as a tribute to one of the greatest tennis racquets of all time.

If you do get a Wilson Pro Staff RF 85 to play with I’d definitely recommend you to not string it up with a full poly string job. The racquet plays most beautiful with set of natural gut

, but also works well with a hybrid

Have you played with the Wilson Pro Staff RF 85? Or do you own a previous version? Please comment below!

What racquets do the ATP pros use?

Buy the Wilson Pro Staff RF 85 and other tennis gear:

Do I need a heavy racquet to hit hard?

Thanks for a great nerd tennis site. Its brilliant. And very good racquet review. Whats your views on Boris becker Melbourne racquet? I recently pick one up and loving it!
Thanks again.

Thanks for your kind words, Alf! Appreciate it.

The BB Melbourne is a great racquet. Very similar to the HEAD LM Radical Tour in my opinion. Hard to find these days so don’t let it go if you like it!

Loving the site, check in most weeks to see the content.

Do you have any advice in changing rackets. I currently play with Wilson ultra (last years) and also have yonex ai 100 which I like both but find with ultra I can over hit and was starting to get wrist pain. I’ve always gone for 300g unstrung weight but I’m thinking maybe go up in weight but down in stiffness. I’m 38 and when I was young played with 95 inch head. The new rackets are stiff and big head at 100 and have played with this last 10 years or so.
I’ve also changed to a single hand backhand, I’m thinking smaller head would be better.
Two rackets thinking of purchasing are Prince textreme tour 95 but concerned it lacks power? Your thoughts? And yonex duel g 310 which seems to get good write up on tennis warehouse.
Thanks
Steve

Hi Steve,
Thanks for the kind words! Smaller head and less stiffness sounds like the way to go.

I have a few options for you to consider:
Wilson Ultra Tour (weighs 305 unstrung so best to add lead at 3 and 9 and maybe in the handle)
Prince Textreme Tour 95 (also needs lead tape at 3 and 9 or 12 depending on your preference)
Tecnifibre Tfight 315 Ltd (lead tape at 3 and 9 again!)
Angell TC 97 Custom – choose string pattern, grip shape and more!

All those racquets are great, arm-friendly and I’m sure you’ll find a good match!

Let me know how it goes.

I find the Pro staff RF85 the closest racket made, to the feel, power curve and touch of the Wilson that I played with in college. For those of us who played in the seventies, this is the closest racket you will find that plays like a Stan Smith Tournament.
2 ounces lighter, stiffer,but it talks to you just like a Smith when you play. A masterpiece with natural gut. Like going Home.
Mark